Once upon a time, I was working at Snaplogic, and at that time its office was in downtown San Mateo. Pretty much across the street from a great coffee shop, Kaffeehaus.

If you’ve been there, or even if you just looked at the website, you’d realize that the owner put quite an effort into it being a Viennese-style coffee house, with all the interior design decisions that go with it.

Now, a local coffee shop is often a place where people expect to post some local notices and ads (“lost dog”, “handyman available”, “local church choir concert”, etc). And here’s a conundrum. A simple cork bulletin board with a bunch of papers pinned to it just did not seem to fit the overall mood/interior/decor of the cafe: 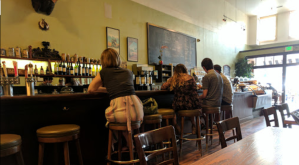 Yet the cafe does want to serve local community and become an institution.

This being Silicon Valley, Val, the Kaffeehaus owner, had a vision — what about a virtual board, as a touch-screen.

The name was quickly chosen to be Wildboard — because it is, well, a bulletin board and in honor of the boar’s head that is prominently featured on the wall:

A multi-touch-based virtual bulletin board sounded interesting. Most touch-screen kiosks I’ve seen so far — in hotels and malls, for instance, or things like ImageSurge — only allow tap, not true multi-touch. (To be honest, multi-touch may or may not be useful — but see below and see also P.S. — but it is a very nice “pizzazz”).

And we — that is, myself and Vio — got to work. And in short order we had:

Charismatic Val somehow managed to get a big touch screen from Elo Touch. Here’s how it fit in the decor: 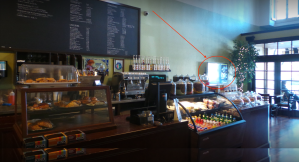 A network of such bulletin boards, allowing hyper-local advertising, seems like a good idea. Monetization can be done in a number of ways:

P.S. One notable exception is a touch-screen showing suggestions in Whole Foods in Redwood City.